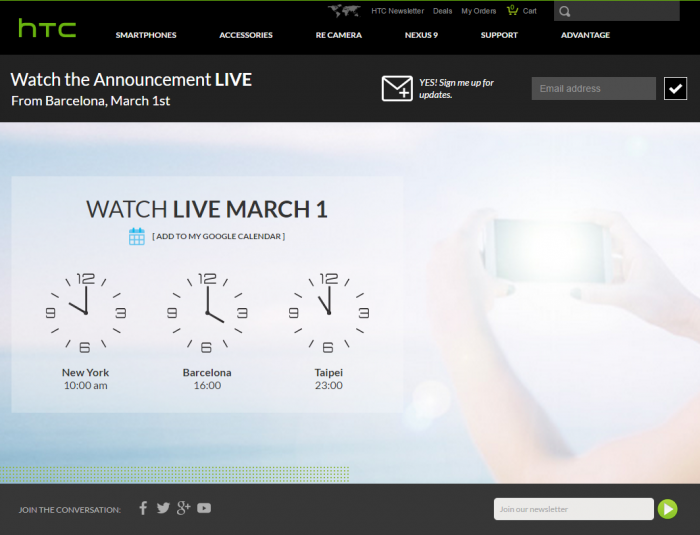 At this point, we probably know more about the HTC One M9 than HTC would care to admit. Either way, HTC still plans to try and “wow” us with its latest flagship device in Barcelona during MWC 2015. To ensure we don’t miss a single lens flare video, adjective laced feature set, or downright hyperbole, HTC has posted streaming information for the March 1st event.

Those of you unlucky enough to attend the event in Barcelona will be able to enjoy all the benefits of the unveiling without having to incur the negative effects of jet lag and tech blogger sweat. Simply grab some popcorn, find a comfy spot on your couch, and then head over to the HTC event site to experience the launch of the HTC One M9 with the rest of the world.

MWC 2015 will be full of exciting announcements, and despite previous leaks, the M9 will still be one of them. You won’t want to miss out on HTC’s latest and greatest, so be sure to bookmark the event page or add the event to your Google Calender.

END_OF_DOCUMENT_TOKEN_TO_BE_REPLACED

It’s no secret that I enjoying gaming. I may not get to do it as much as I used to, but I still enjoy it when I can. That’s why I’m always experimenting with ways to improve my gaming experience on Android. END_OF_DOCUMENT_TOKEN_TO_BE_REPLACED