It’s time to sing that sad song again: the one when HTC has its flagship device leaked well before its official announcement. This time we can give thanks to Twitter leaker @upleaks for the pre-release content. Somehow he/she got their hands on some HTC One M9 advertising media and graciously decided to share it with the world — or at least the Twitterverse.

Yesterday, @upeaks started tweeting about some supposed One M9 specs, stating that we will see a 13MP front camera and SD card slot within the device — which is not that surpising seeing how the M8 had a SD slot and the Desire Eye has a 13MP front facing shooter. Soon after, he tweeted two promo pictures showing off the full device with the title “HTC One M9″ being displayed as well.

In the pictures, we are shown what is believed to be the M9 — which looks exactly like the M8 save for two small changes. Those major changes include a rear camera which is no longer a Duo-dual camera setup but now just one large square lens housing the supposed 20MP shooter, and the addition of a softkey in the phone’s navigation bar — everything else looks exactly like the m8. 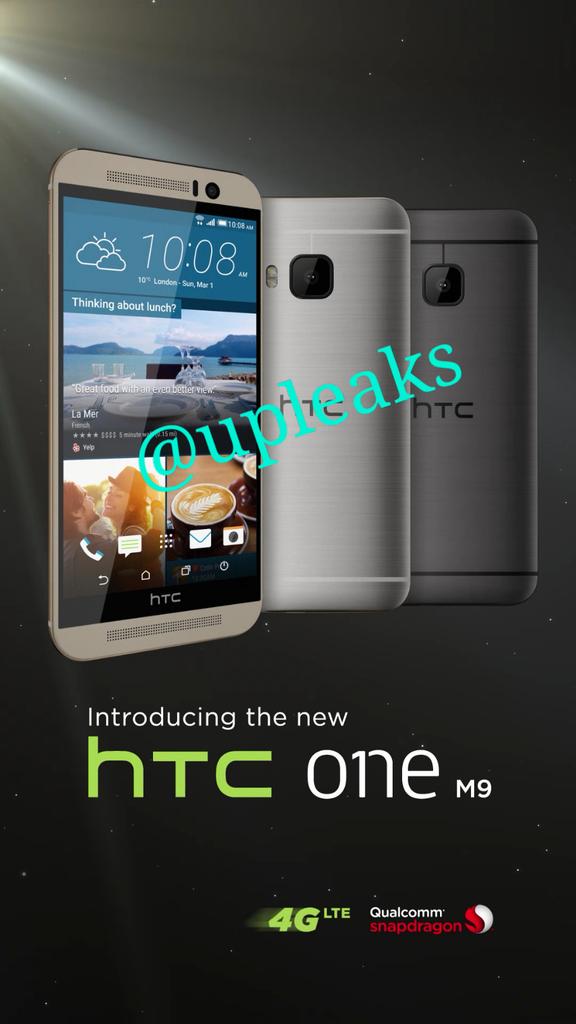 The next batch of leaks we’re treated to, are three commercials all centering around the One M9’s main element: the camera and its features.

The first of the three videos (that have since been merged) show the camera capturing shots in great detail, including low light pictures. We also get to see the device’s Fragment-like editing skills, which while pretty cool, don’t show us anything we haven’t already seen various apps accomplish.

The next video shows off the editable stock themes within the new version of Sense that the phone has equipped. And in the last video (the only one with sound), we’re treated to the promo video that will be showcased at MWC and basically about the M9’s hardware design, software changeability, upgraded Boomsound speaker, and more.

This is the most we’ve seen from the HTC One M9 so far, and looks to not only be legit but also have all the information that HTC will be covering during the announcement. The HTC team sure has its work cut out for them now that these leaks have surely stolen some of the thunder away from their planned MWC announcements. Or perhaps, that was the plan all along?

What is your favorite feature about the M9 that you’ve seen so far?

END_OF_DOCUMENT_TOKEN_TO_BE_REPLACED

It’s no secret that I enjoying gaming. I may not get to do it as much as I used to, but I still enjoy it when I can. That’s why I’m always experimenting with ways to improve my gaming experience on Android. END_OF_DOCUMENT_TOKEN_TO_BE_REPLACED