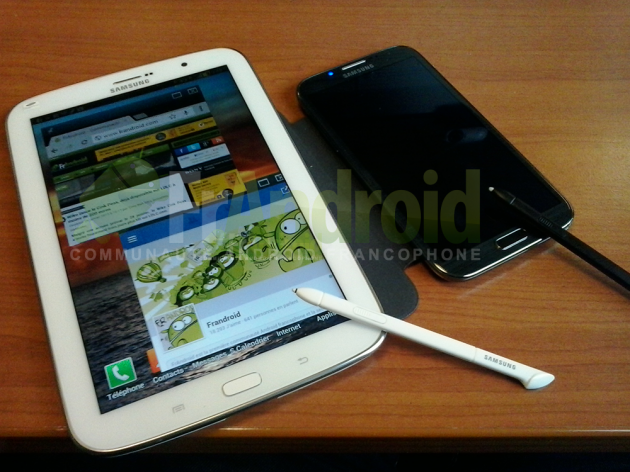 Yesterday, we were treated to a few spy shots of the upcoming Samsung Galaxy Note 8.0 and today, we get to see a few more pics courtesy of French Android community Frandroid. Posing for the camera, this 8-inch piece of hardware still looks like an oversized phone rather than a mid-sized tablet.

The last time I wrote about the Note 8.0, I was hopeful that the final design would change, now, I’m not so sure. It looks like Samsung might stick with this extreme phablet design of having hardware buttons, thus crushing my dreams of owning one.

The good news? We get a better look at the software running on the Note 8.0. It’s supposed to come equipped with Android 4.2, and by the looks of the phone-style launcher, I’d say that rumor can be confirmed. It also appears to be fully equipped with all the latest Samsung software treats such as Multi-window.

The French site goes on to list a few specs for us, and it appears the Note 8.0 is sporting:

If I were interested in this device, which I’m not, then my next question would certainly be price. Price will be the determining factor in just what sort of chance a phablet of this magnitude has in a tablet market dominated by affordability.

I don’t think I can even call the Galaxy Note 8.0 a tablet anymore, as it is clearly designed as a phablet of extreme proportions. It has phone-style hardware buttons, a phone-style design, a phone-style software layout, and let’s not forget — an earpiece up top for making calls. Yes, folks, this is an 8-inch phablet, nothing more, nothing less.

Although Samsung is set to announce this bad boy at Mobile World Congress next month, I’m betting we’ll known everything there is to know about the device within the next week or so.

END_OF_DOCUMENT_TOKEN_TO_BE_REPLACED

It’s no secret that I enjoying gaming. I may not get to do it as much as I used to, but I still enjoy it when I can. That’s why I’m always experimenting with ways to improve my gaming experience on Android. END_OF_DOCUMENT_TOKEN_TO_BE_REPLACED