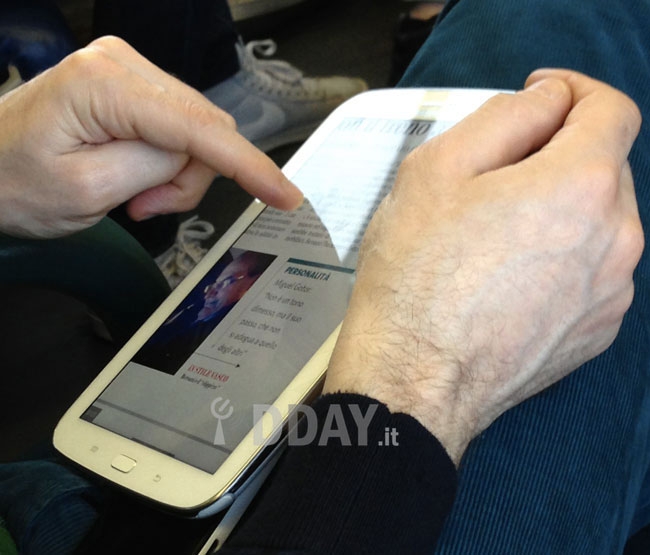 The infamous blurry cam strikes again, and this time, it’s the Galaxy Note 8.0 that was caught showing off its pre-release wares. Italian outlet DDAY.it caught this 8-inch S-Pen wielding piece of hardware out in the wild, and lo and behold, it resembles an 8-inch Samsung Galaxy Note II/S III.

While it’s not too surprising that Samsung would continue with a design that’s resulted in over 40 million device sales, it is a bit of an odd design for a tablet. I am, of course, talking about the hardware buttons.

I can barely tolerate hardware buttons on a smartphone, but on a tablet — they’re simply horrendous and unnecessary. It’s a bad design choice in my opinion and I’m hoping the final product won’t have them. Remember, Samsung is known to switch up designs all the way up until release, so it’s very possible the Galaxy Note 8.0 we’re seeing in these photos isn’t the Note 8.0 we’ll end up seeing at Mobile World Congress next month.

I’m going to pretend I didn’t see this poor judgement call by Samsung and I’m going to keep my hopes up for a Galaxy Note 8.0 that I might actually be interested in.

END_OF_DOCUMENT_TOKEN_TO_BE_REPLACED

It’s no secret that I enjoying gaming. I may not get to do it as much as I used to, but I still enjoy it when I can. That’s why I’m always experimenting with ways to improve my gaming experience on Android. END_OF_DOCUMENT_TOKEN_TO_BE_REPLACED