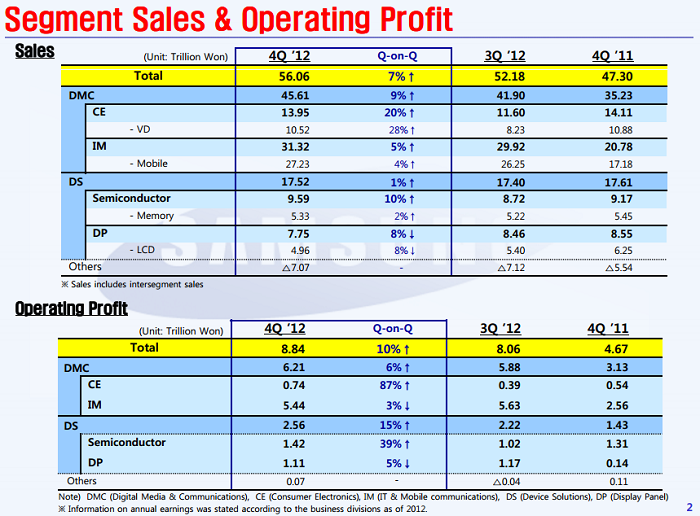 Samsung may have their hands in a large number of pots, but whatever they’re doing, they’re doing a good job as their profits for Q4 came in at around 8.27 billion dollars. In a brief summary, Samsung notes that both smartphone and tablet demand was up in Q4, helping to maintain solid earnings.

From the numbers, it appears mobile sales were up 4% quarter-on-quarter while operating profit for mobile may have actually dipped a few percentage points.

In the overall scheme of things, Samsung continues to do well with about 52.45 billion US dollars in revenue in Q4 alone, up 7% from Q3 2012.

If you’re into earnings reports, you can read the rest by following the source link below. But if you want my quick summary: Samsung is making money as well as some great Android smartphones.

Chrome Beta for Android Updated to Include Support for chrome://flags

END_OF_DOCUMENT_TOKEN_TO_BE_REPLACED

It’s no secret that I enjoying gaming. I may not get to do it as much as I used to, but I still enjoy it when I can. That’s why I’m always experimenting with ways to improve my gaming experience on Android. END_OF_DOCUMENT_TOKEN_TO_BE_REPLACED