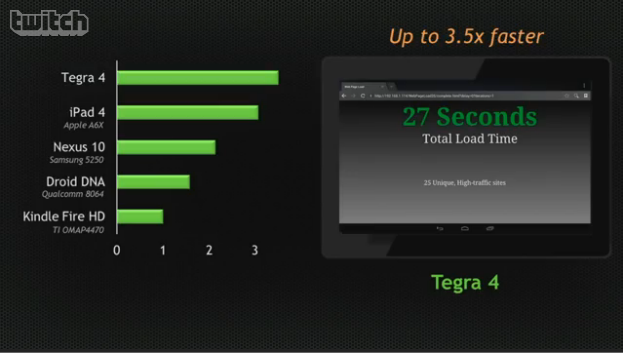 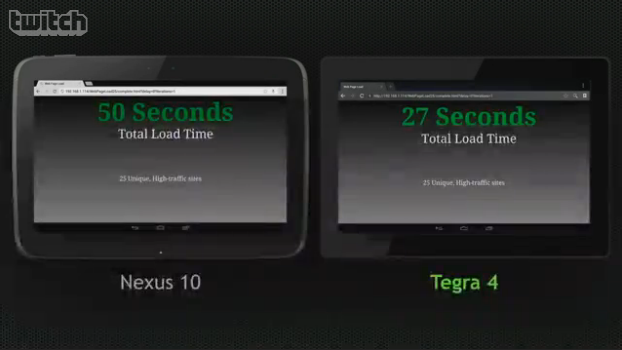 Of all the announcements made by NVIDIA at CES 2013, the Tegra 4 was probably the least surprising. We knew it was coming, I mean, NVIDIA wasn’t going to use the Tegra 3 forever. As to be expected, the next iteration is both faster and more powerful without requiring more juice (would be odd if is wasn’t… right?)

NVIDIA CEO Jen-Hsun Huang showed off the speed of the Tegra 4 by pitting a super-secret prototype Android tablet up against the Nexus 10, and of course, the new Tegra 4 outperformed the Nexus 10. In fact, it blew through 25 websites in just 27 seconds, compared the Nexus 10’s 50 seconds.

This controlled testing isn’t exactly real-world testing, but it’s impressive nevertheless. You can feel confident Tegra 4 will outperform anything currently available, and why wouldn’t it, it’s a future tech.

Really not much to see here. It’s the Tegra 4 and it’s faster, more powerful, and battery friendly.

Tegra 4 also enables worldwide 4G LTE voice and data support through an optional chipset, the fifth-generation NVIDIA Icera® i500 processor. More efficient and 40 percent the size of conventional modems, i500 delivers four times the processing capability of its predecessor.

“Tegra 4 provides enormous processing power and efficiency to power smartphones and tablets, gaming devices, auto systems and PCs,” said Phil Carmack, senior vice president of the Tegra business at NVIDIA. “Its new capabilities, particularly in the area of computational photography, will help improve a whole range of existing products and lead to the creation of exciting new ones.”

Its HDR capability captures images, including those taken with a flash, the way they are seen by the human eye — with detail in both bright and dark areas.

Tegra 4 consumes up to 45 percent less power than its predecessor, Tegra 3, in common use cases. And it enables up to 14 hours of HD video playback on phones.

About NVIDIA
NVIDIA (NASDAQ: NVDA) awakened the world to computer graphics when it invented the GPU in 1999. Today, its processors power a broad range of products from smartphones to supercomputers. NVIDIA’s mobile processors are used in cell phones, tablets and auto infotainment systems. PC gamers rely on GPUs to enjoy spectacularly immersive worlds. Professionals use them to create 3D graphics and visual effects in movies and to design everything from golf clubs to jumbo jets. And researchers utilize GPUs to advance the frontiers of science with high performance computing. The company has more than 5,000 patents issued, allowed or filed, including ones covering ideas essential to modern computing. For more information, see www.nvidia.com.

Certain statements in this press release including, but not limited to, statements as to the impact and benefits of the NVIDIA Tegra 4 processor and the effects of the company’s patents on modern computing are forward-looking statements that are subject to risks and uncertainties that could cause results to be materially different than expectations. Important factors that could cause actual results to differ materially include: global economic conditions; our reliance on third parties to manufacture, assemble, package and test our products; the impact of technological development and competition; development of new products and technologies or enhancements to our existing product and technologies; market acceptance of our products or our partners products; design, manufacturing or software defects; changes in consumer preferences or demands; changes in industry standards and interfaces; unexpected loss of performance of our products or technologies when integrated into systems; as well as other factors detailed from time to time in the reports NVIDIA files with the Securities and Exchange Commission, or SEC, including its Form 10-Q for the fiscal period ended October 28, 2012. Copies of reports filed with the SEC are posted on the company’s website and are available from NVIDIA without charge. These forward-looking statements are not guarantees of future performance and speak only as of the date hereof, and, except as required by law, NVIDIA disclaims any obligation to update these forward-looking statements to reflect future events or circumstances.

END_OF_DOCUMENT_TOKEN_TO_BE_REPLACED

It’s no secret that I enjoying gaming. I may not get to do it as much as I used to, but I still enjoy it when I can. That’s why I’m always experimenting with ways to improve my gaming experience on Android. END_OF_DOCUMENT_TOKEN_TO_BE_REPLACED