The Race to a Billion: Android Predicted to Reach 1 Billion Users well Before iOS | #Android

The Race to a Billion: Android Predicted to Reach 1 Billion Users well Before iOS 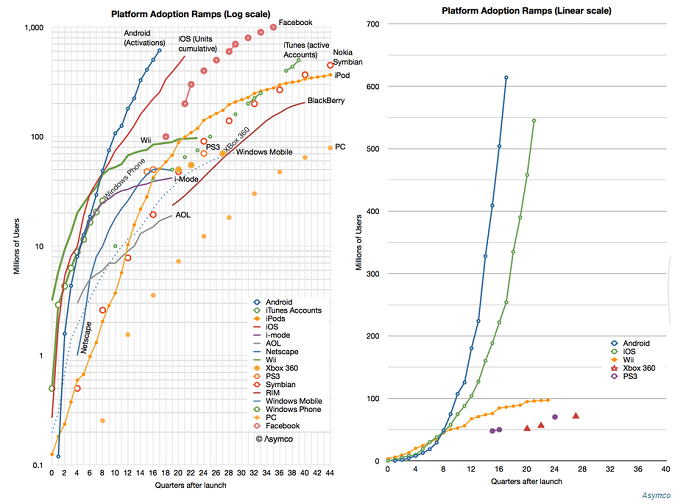 With 2013 in full swing, Horace Dediu of Aysmco takes another look at which platforms are leading the pack in the race to a billion. While Horace includes a plethora of platforms, we’ll take a close look at the two we’re most concerned about: Android and iOS.

A quick glance at the Platform Adoption Ramps and you’ll notice Android has managed to surpass iOS in total user base and is on the path to reach 1 billion users well before iOS. These are compelling numbers when compared to the multitude of other platforms that have not only been around longer than Android, but have failed to even come close to the billion mark.

Facebook has already managed to cross the finish line, however, Horace points out that the slopes of both Android and iOS point towards an eventual overtake in overall ecosystem size.

Other interesting trends pointed out by Horace include:

You’re going to want to go and pick up a nice bottle of bubbly as Android is expected to reach 1 billion users at some point in 2013. Of course, iOS users will have to wait until 2014 to celebrate — which I’m sure it bound to cause some serious butt hurt.

The Android Show on #Android – Episode #45

END_OF_DOCUMENT_TOKEN_TO_BE_REPLACED

It’s no secret that I enjoying gaming. I may not get to do it as much as I used to, but I still enjoy it when I can. That’s why I’m always experimenting with ways to improve my gaming experience on Android. END_OF_DOCUMENT_TOKEN_TO_BE_REPLACED