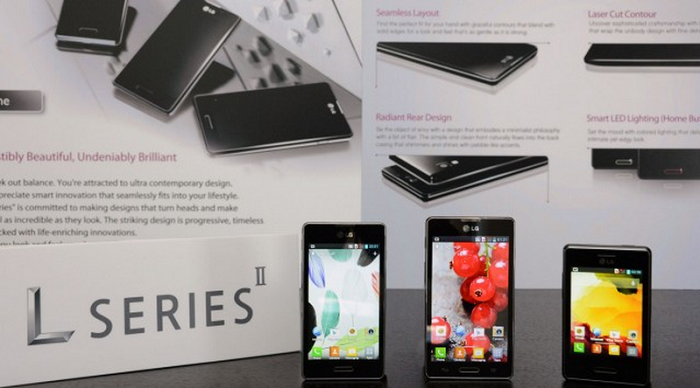 LG has been releasing some pretty lame teasers made to get us excited about what they have in store for Mobile World Congress this month. While we’ve seen leaks, heard rumors, etc., we’ve been patiently awaiting word from LG on what exactly it is they’ll have for us. Well, now we know, as LG has officially taken the lid off the next generation of Optimus L series devices.

As expected, there’s really not much to get excited about. Most of the devices are mid-range and probably won’t see the light of day here in the U.S., but if you’ve been curious about what LG could possibly come up with after the Nexus 4/Optimus G, then read the full presser below.

SEOUL, Feb. 12, 2013 – LG is staying true to its rich design heritage at this year’s Mo-bile World Congress (MWC) with the introduction of the Optimus L SeriesII. The widely successful L Series has evolved to include contemporary design aesthetics and innovations that improve on the original. With more than 10 million Optimus L Series phones sold in the first 10 months, L SeriesII looks to continue this momentum with its sophisticated style and differentiated features.

Optimus L SeriesII embodies the beauty of the first L Series but with a more refined touch. The design philosophy of L SeriesII has been enhanced to include four new design elements: Seamless Layout, Laser Cut Contour, Radiant Rear Design and Smart LED Lighting on the home button.

L SeriesII also offers an expanded set of user-convenient features including those unique to LG smartphones such as QuickMemo, Quick Button and Safety Care. QuickMemo allows users to capture and share handwritten ideas with others using just a fingertip. Quick Button enables customers to personalize a hotkey to launch any app such as the camera, browser, music player or even QuickMemo. Safety Care offers three options – Emergency Call Forwarding, Phone Non-Usage Notice and My Location Notice – which can be programmed to contact a loved one in case of an emergency.

“LG has a history of pushing the envelope when it comes to style and Optimus L SeriesII builds on this heritage of design innovation,” said Dr. Jong-seok Park, president and CEO of LG Electronics Mobile Communications Company. “By evolving the sophisticated style and premium features of the original Optimus L Series, its sequel is expected to continue the popularity of the L Series around the world.”

END_OF_DOCUMENT_TOKEN_TO_BE_REPLACED

It’s no secret that I enjoying gaming. I may not get to do it as much as I used to, but I still enjoy it when I can. That’s why I’m always experimenting with ways to improve my gaming experience on Android. END_OF_DOCUMENT_TOKEN_TO_BE_REPLACED