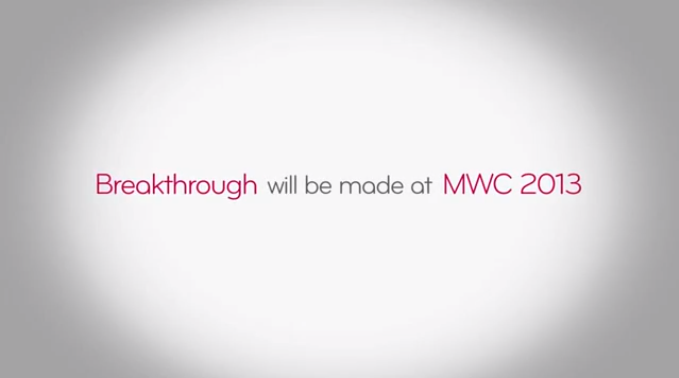 Yesterday, LG released a teaser photo hoping to drum up excitement for its upcoming appearance at Mobile World Congress. Unfortunately, the teaser was quite boring and completely void of any information or hints as to what they could possibly be unveiling. Now, it seems LG is following up with its uneventful teasers by releasing a vague and unexciting MWC video.

The video claims a “breakthrough will be made at MWC 2013,” and fills our screens with buzzwords such as “Premium,” “Stylish,” “Speedy,” etc. — all vague adjectives that could describe just about any mobile device available.

You’ll also notice quite a few slice effects and sounds, splitting the screen into two. Perhaps we’re looking at another failed dual-screen device?

I have absolutely no idea what LG has in store for us at MWC and frankly, I can’t say I’m excited in the least bit. Curious? Yes. Excited? Not really.

Does this video get you excited? What do you expect LG to finally unveil at MWC? Whatever it is, they sure aren’t setting the bar high with these lame teasers.

END_OF_DOCUMENT_TOKEN_TO_BE_REPLACED

It’s no secret that I enjoying gaming. I may not get to do it as much as I used to, but I still enjoy it when I can. That’s why I’m always experimenting with ways to improve my gaming experience on Android. END_OF_DOCUMENT_TOKEN_TO_BE_REPLACED