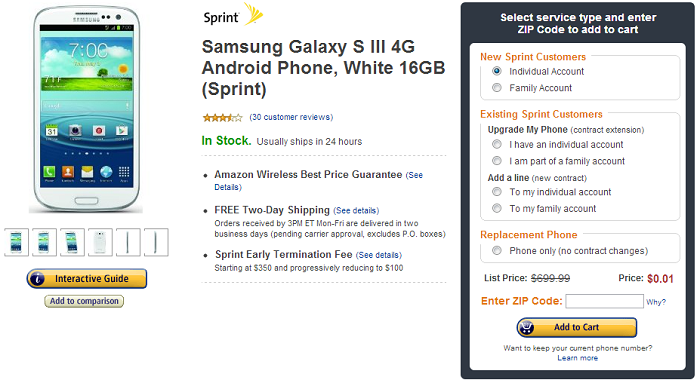 The Samsung Galaxy S III was hands down the best selling Android device of 2012 and continues to outsell the majority of devices despite being over 8 months old now. If your budget has forced you to pass on this device, as well as others, it may be time to reconsider as Amazon is now offering the Sprint model for a mere penny.

The only thing cheaper than a penny is free, and if you can’t find a penny laying around, then I’m sure someone will give you one. The penny deal is incredible, and like most things that are incredible, they come with a catch.

In order to pick up a Samsung Galaxy S III on Sprint for a penny, you have to be a new customer who is willing to sign a 2-year contract. Since the contract really isn’t a bid deal for the majority of us, you’re next question should be: “do I want to switch to Sprint?”

If you’re tight on cash and considering Sprint as a carrier, this is one deal you’ll certainly want to consider.

To learn more about this great deal, follow the appropriate link below.

END_OF_DOCUMENT_TOKEN_TO_BE_REPLACED

It’s no secret that I enjoying gaming. I may not get to do it as much as I used to, but I still enjoy it when I can. That’s why I’m always experimenting with ways to improve my gaming experience on Android. END_OF_DOCUMENT_TOKEN_TO_BE_REPLACED