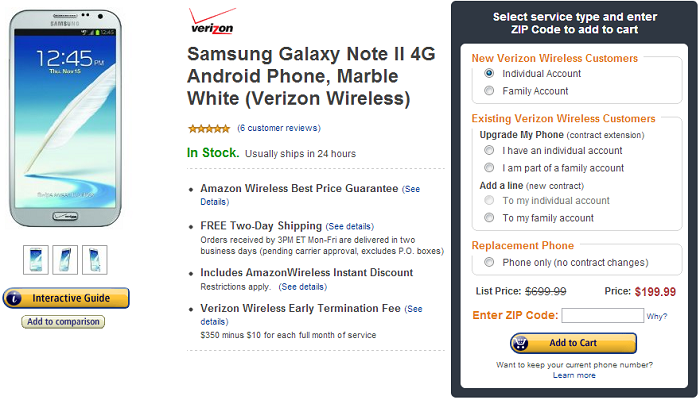 If you’ve been thinking about picking up a Samsung Galaxy Note II on Verizon, then you might want to take a look at the deal Amazon Wireless is offering. New users, as well as those looking to upgrade, can now score a Galaxy Note II for $100 less what they’d pay via Verizon.

At this point in the game, I’m surprised that anyone would even consider purchasing a device straight from a carrier, but if you were, don’t! Seriously, don’t! Take a look at Amazon Wireless and you’ll be thankful at all the money you’ll save.

If you’re interested in taking advantage of the deal Amazon Wireless has on the Verizon Galaxy Note II, you can get all the information you need by following the links below.

Apple’s Siri: The Verizon Bloatware That Never Was

END_OF_DOCUMENT_TOKEN_TO_BE_REPLACED

It’s no secret that I enjoying gaming. I may not get to do it as much as I used to, but I still enjoy it when I can. That’s why I’m always experimenting with ways to improve my gaming experience on Android. END_OF_DOCUMENT_TOKEN_TO_BE_REPLACED