Deal: Get a Free Moto E With the Purchase of a Moto X! | #Android 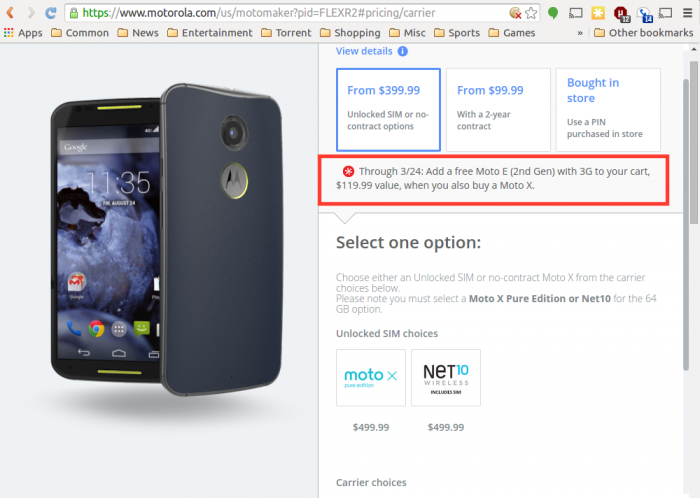 Motorola is really proud of their latest products, as they should be. With the recent release of the new Moto E, the company has done a complete refresher of their Moto family: X (2014), G (2014),and the E (2015). With Motorola, you’re now getting more customization, Lollipop, and as of today (for some) the ability to snag a free Moto E!

Earlier yesterday, a user over on reddit was able to get a special promotion to show when finalizing his Moto X build promotions: Buy a Moto X and get a free Moto E 3G. We aren’t sure how he got the promo to pop, and we haven’t seen it featured anytime we try, but the promo is indeed showing on the image above. There’s also a cutoff date of March 24th if you’re able to get it to show.

This could be a great deal for those that need a second phone or simply just want another phone to play around with. If you’re able to get this promo to show, let us know how, and be sure to jump on the deal!

END_OF_DOCUMENT_TOKEN_TO_BE_REPLACED

It’s no secret that I enjoying gaming. I may not get to do it as much as I used to, but I still enjoy it when I can. That’s why I’m always experimenting with ways to improve my gaming experience on Android. END_OF_DOCUMENT_TOKEN_TO_BE_REPLACED