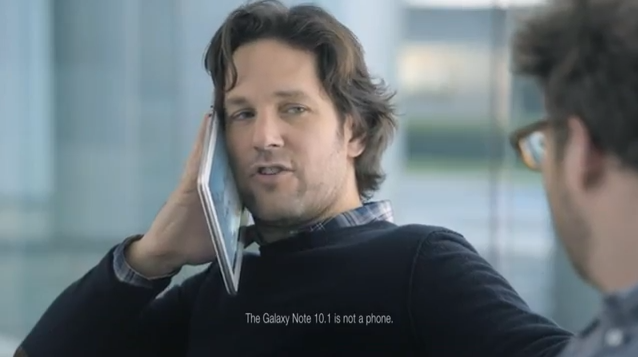 If you had the opportunity to catch Samsung’s Super Bowl ad, you already know they must have paid a fortune to make it. The ad featured comedians Seth Rogan and Paul Rudd, as well as tablet cameo from basketball star LeBron James. I’m not sure it was worth the millions of dollars Samsung most likely spent, but it does feature a few notable quips between Seth and Paul.

Paul: Are you sure that you’re not here to maybe see someone called Sam Sung?

Paul: Why don’t you take that S Pen and shove it up your…

And my favorite from the Extended cut:

Paul: I know it’s called a Hashtag, but…

Paul: But I’m afraid if I say HASH tag around you, you’ll think it’s something else and get excited.

You can check out the Extended cut version below. What do you think: hit or miss?

Amazon Drops the Price of the Verizon Galaxy Note II to $149.99 [Titanium Grey]

Carbon for Twitter Finally Available in the Play Store

END_OF_DOCUMENT_TOKEN_TO_BE_REPLACED

It’s no secret that I enjoying gaming. I may not get to do it as much as I used to, but I still enjoy it when I can. That’s why I’m always experimenting with ways to improve my gaming experience on Android. END_OF_DOCUMENT_TOKEN_TO_BE_REPLACED