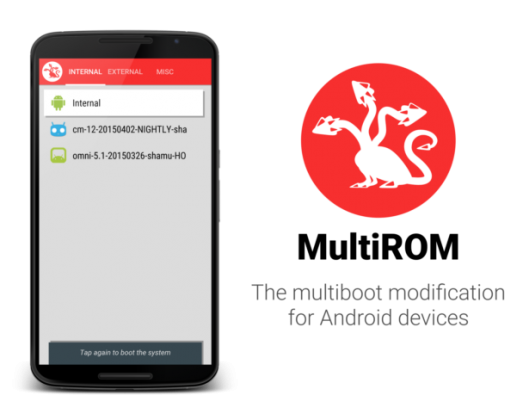 MultiRom used to be a root tweak that was at the top of everyone’s mind, but as of late, it hasn’t been receiving much traction. The last major phones that were supported were the Nexus 5, HTC One M8, and the Galaxy S4. However, with this latest update, the tweak that allows you to run multiple ROMs is getting a breath of new life thanks to its added support for our favorite whale, Shamu.

Thanks to update version 32, the Nexus 6 can run the famed MultiRom tweak. MultiRom replaces your recovery and features a boot manager which allows you to select which ROM you want to run on boot. This allows you to run Cyanogen OS, Ubuntu Touch, or any other ROM that you can find for the Nexus 6.

However, there are a couple of things to note with MultiRom. For starters, smartphones (pocket computers) were originally designed to only run one OS at a time and therefore trying to run multiple operating systems on them can present issues with bugs, security, and most importantly, storage issues (thanks to our new SD card-less flagships).

If you’re feeling daring or want to try out a couple different ROMs, be sure to head on over to the XDA link below and start flashing away. As always, read the instructions first. Eh, who am I kidding? Go brick your phone one good time and then try to learn from your mistakes.

Deal: Verus is Hosting an 80% Off Sale for One M9 and Galaxy S6 Cases, Along with S6 Contest

END_OF_DOCUMENT_TOKEN_TO_BE_REPLACED

It’s no secret that I enjoying gaming. I may not get to do it as much as I used to, but I still enjoy it when I can. That’s why I’m always experimenting with ways to improve my gaming experience on Android. END_OF_DOCUMENT_TOKEN_TO_BE_REPLACED