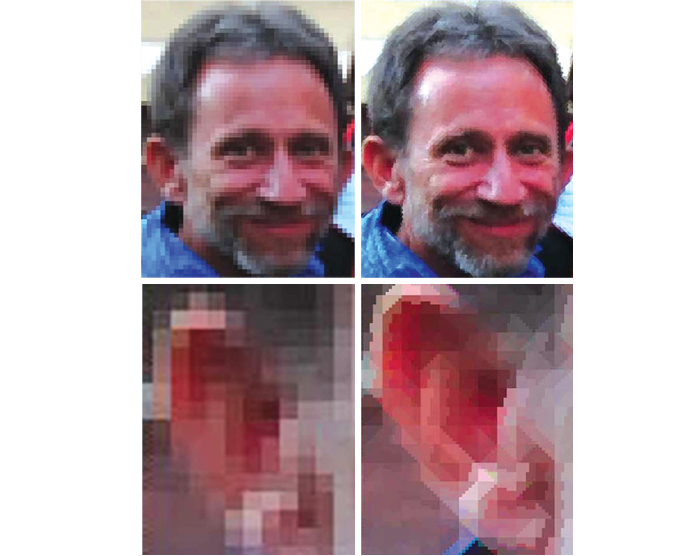 “Squares was the logical thing to do.” “Of course, the logical thing was not the only possibility … but we used squares. It was something very foolish that everyone in the world has been suffering from ever since.”

Despite the fact that Kirsh now calls those square pixels “foolish,” they have become the de facto layout for display technology the world over.

No more is the square pixel layout more prevalent than in our beloved mobile display technology. As manufacturers fight for any advantage they can find, the pixel, and its density, have turned into little square bullets of retina displaying ammo.

Manufacturers may have reached well beyond what the average eye can discern, but they continue to divide and conquer. Manufacturers are now reaching the threshold of 440ppi (about as dense as a side-by-side square pixel layout gets on a mobile-sized device) and wondering, “how can we go even further?”

Samsung, in particular, has been experimenting with abandoning the square layout in order to achieve ppi’s above 440 on a mobile device, and it would appear, they have been successful.

If reports from DigiTimes are to be believed, Samsung is developing hexagon and diamond-shaped pixel layouts for their panels in order to increase resolutions above 440ppi, and they may show up in devices sooner than expected.

In fact, it’s being rumored that the Samsung Galaxy S4, which is expected to be announced this April, will sport the new multi-shaped pixel display. It will also feature the highest ppi of any mobile device we’ve yet to see.

If this news is correct, then I’m beyond excited, and even though I know my eyes won’t see the difference, I’m betting my wallet will.

At this point, Samsung realizes that releasing yet another 440ppi device into the mobile world won’t give much of an advantage, but releasing a device using a “new” pixel arrangement and going well beyond 400ppi certainly will.

Many of you may be thinking “why bother?” Why not put that money into developing better battery tech, or something users would actually benefit from? I’d have to agree with you on that one, but as we all know, right now, it’s all about the ppi. If Samsung can boast the highest ppi, then Samsung will have the highest of another ppi: profit per individual.

I really do wish manufacturers would focus their efforts elsewhere, however, I can’t say I’m not immensely intrigued to see how this turns out.

The Android Show on #Android – Episode #46

END_OF_DOCUMENT_TOKEN_TO_BE_REPLACED

It’s no secret that I enjoying gaming. I may not get to do it as much as I used to, but I still enjoy it when I can. That’s why I’m always experimenting with ways to improve my gaming experience on Android. END_OF_DOCUMENT_TOKEN_TO_BE_REPLACED