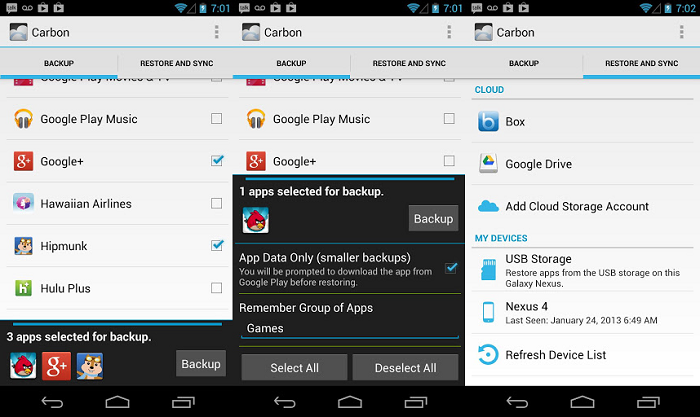 Koush Dutta, collector of yachts and developer behind ClockworkMod, has moved his new project, Carbon – App Sync and Backup, out of beta and into the Play store.

Carbon is a backup app that allows user to backup their apps and data to SD or cloud storage. One of the major advantages of Koush’s Carbon is that it can be used with or without root.

Carbon comes in a basic free version which is ad-supported, however, users can upgrade to a Premium version by purchasing the license key via the Premium app in the Play store.

The Premium version costs $4.99 and offers everything the free version does along with:

Koush also notes the app is NOT available to Motorola devices thanks to a bug that seems to break Android’s backup mechanism. Other than that, you’re free to download it and give it a try.

If you’d like to give Carbon – App Sync and Backup a try, simply follow the link below.

Sprint Offering BOGO Deal on LG Optimus G, but you can do Better

Android 4.2.1 now Pushing out to the Sprint Samsung Galaxy Nexus

END_OF_DOCUMENT_TOKEN_TO_BE_REPLACED

It’s no secret that I enjoying gaming. I may not get to do it as much as I used to, but I still enjoy it when I can. That’s why I’m always experimenting with ways to improve my gaming experience on Android. END_OF_DOCUMENT_TOKEN_TO_BE_REPLACED