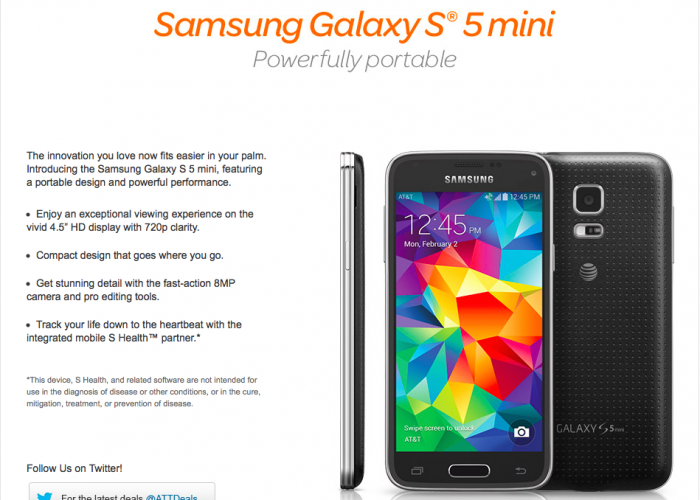 In the midst of their explosive Galaxy S6 hype, Samsung has decided to let us all know of another Galaxy that will soon grace our presence, the Galaxy S5 Mini. Almost a year after the original S5 and less than a month before the new S6, — yes, this is a real thing.

The S5 mini will be an AT&T exclusive (we’re not sure if this is permanent or temporary) and will come running Android 4.4.4. You’ll also be looking at a device with a 4.5” HD (720×1280) display, 1.4 GHz processor, 8MP rear camera paired with a 2MP front camera, along with 16GB of internal storage and the availability of expansion thanks to a microSD card slot — something that’ll be missing in the Galaxy S6 Mini which is due to be released in 2017. /s

You’ll be able to buy the S5 Mini on either a 2-year contract for $99 or on one of AT&T’s Next (financing) plans. Just remember that the Moto X (2014) running Lollipop or the Galaxy Alpha are also available at around similar pricing.

The Galaxy Mini’s are notorious for coming out late in the States, remember the S3 Mini arrived on Verizon after the S4 was already released for half a year. If for some reason you’re looking to get a smaller S5 or a device still running Kit Kat, you can buy the S5 Mini on March 20th — again, only from AT&T.

END_OF_DOCUMENT_TOKEN_TO_BE_REPLACED

It’s no secret that I enjoying gaming. I may not get to do it as much as I used to, but I still enjoy it when I can. That’s why I’m always experimenting with ways to improve my gaming experience on Android. END_OF_DOCUMENT_TOKEN_TO_BE_REPLACED