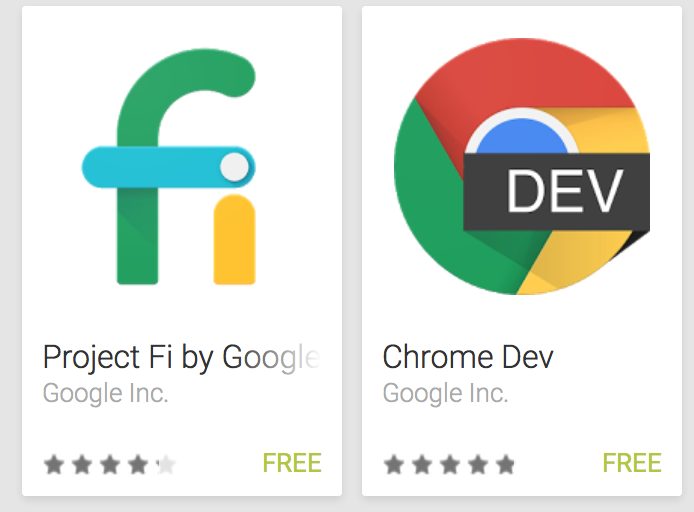 Yesterday during Google’s community-coined #UpdateWednesday, the tech giant not only update several apps (such as Googel+, Messenger, and Chrome Beta) but they also decided to release a few more apps under their portfolio: Chrome Dev, Project FI, and Connectivity Services. All of which you can go to the Play Store and download now.

Chrome Dev was bound to come to Android eventually, especially with us already having the stable and  beta branches available, only thing missing is Canary. Chrome Dev will allow you to test/use Chrome with the latest changes in effect, so expect bugs and weird issues to rise, while fawning over those new features that other don’t have yet.

The Project Fi app will be your portal to controlling your Project Fi account, such as managing your plan and any changes you’d like to make through it. Unfortunately you can’t really see anything happening through the app unless you have an invite, which I haven’t heard of anyone receiving just yet, but once you do this app will get you started and on your way.

The last app Google published was their Connectivity Services app, which we aren’t 100% clear on what the app will do or if you actually have to do anything with the app besides having it installed. The description states that the app will “helps Android handle network connections,” with support for  “connecting to Wi-Fi networks automatically and using a Google VPN to help secure your data.” So it’s safe to assume that this app will plug into Project Fi to keep things smooth, safe, and secure.

If you want to be ahead of the game and live on the bleeding edge then hit up the source links below to go ahead and download the app if you haven’t done so as of yet.

Google Adds 70 new Partners to the Google App, now Including RunKeeper and Spotify

Deal: Spigen Hosting 80% Off Sale on Cases for LG G4, HTC One M9, and Other Flagships

END_OF_DOCUMENT_TOKEN_TO_BE_REPLACED

It’s no secret that I enjoying gaming. I may not get to do it as much as I used to, but I still enjoy it when I can. That’s why I’m always experimenting with ways to improve my gaming experience on Android. END_OF_DOCUMENT_TOKEN_TO_BE_REPLACED